All Blogposts contain only personal views and are published in an entirely personal capacity. However, I do not accept any legal responsibility for the content of any comment unless I have refused to delete the comment following a valid complaint. Any complaint must set out the grounds for the deletion of the comment. I also reserve the right to delete comments that - in my opinion, are offensive or make unsubstatiated accusations against persons or groups. Like the BBC, this Blog is not responsible for the content of external internet sites. (with thanks to Valleys Mam's blog where I nicked most of this from). 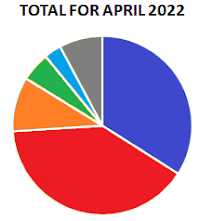 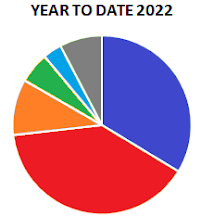 Across April there were 21 Westminster polls released during the month at various times by all the major polling agencies.

Polling average was (figure in brackets compared to last month).

If a General Election were conducted on these APRIL figures and using the new boundaries, it would result in a hung Parliament of L311, C258, SNP47, LD10, PC4 G1, NI18, with neither side being able to form a majority government and Labour needing a coalition of  minimum of the LDems and Plaid - however the LDems demands that we re-enter the EU - including the adoption of the €uro and preferably without even a referendum & the current voting system scrapped and replaced with PR,  combined with Plaid's demands of far greater devolution for Wales up to the same level as Scotland,  make the likelihood of a stable coalition remote at best and Labour would probably choose to limp on with a minority Government.

There were no polls released during the period.

There are Stormont elections in May.  The system they have to use is that the government is formed from the largest party one side of 'the divide' in a power share with the largest party from the other side.  They are unlilely to achieve much - the power share will still be the usual terrible twins of Sinn Fein and the DUP , however for the first time Sinn Fein will be the lead - and not only that, will be the largest party both north and south of the border.  It will almost certainly not sit though because the DUP are currently refusing to sit until the EU-UK Northern Ireland Protocol is scrapped and without the largest Unionist party, the terms of the Good Friday Agreements mean that it cannot form a government and therefore cannot sit.  Two polls were released during the month giving Stormont voting intentions (figure in brackets compared to last month):-

There was no IndyRef polling released during the month.
~~~~~~~~~~~~~~~
LOCAL ELECTIONS - ENGLAND, SCOTLAND & WALESThere are local elections in parts of England, Scotland & Wales in early May and so far what little polling has been  carried out specifically for these shows 37%-33% in Labour's favour -which the Tories, as government of the day and in mid-term, will be more than satisfied with should the actual vote on the day reflect that.   Labour's support is higher than that in metropolitan areas - such as London Manchester etc,  but  lower (and in some instances a lot lower) once you get to the towns and districts, indicating that they are quite rapidly becoming a metropolitan middle/professional class party whether they want to be or not.

In England (but not the devolved home nations) for some reason  local elections - despite the fact they are about councils and thus local services,  usually reflect people's national thoughts and as a result most voters in England tend to vote over issues that have absolutely nothing to do with councils and indeed councils can do absolutely nothing about.  Already doorstep returns suggest the two main issues will be the 'cost of living crisis' & 'PartyGate' - two issues that councils are powerless to do anything about.  They are also plagued by ultra-low turn outs - the last time this set were held was in 2018 and the turn-out was 34.6%.  Time before in 2014 it was 35.5%.
It is quite complex to work out the shift because in some instances whole councils will cease to exist and new ones created since this section of voting was last carried out four years ago.  The number of councils in England and Wales predicted to be controlled by each party is shown in this table:- 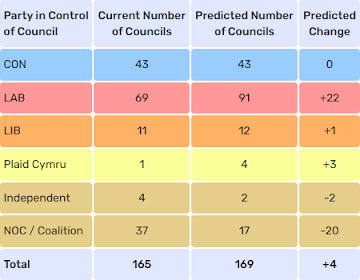 LOCAL AUTHORITY PREDICTION - ENGLAND & WALES
The prediction is that Labour will gain around 20 councils and are not expected to lose any.  The Tories might gain and lose a few councils, but their net total is expected not to change much, if at all. The LDems should pick up the new Somerset Unitary Authority.  Overall this would be a good result for the Tories from their perspective, and Boris Johnson personally, given the Tories' problems with 'Partygate' and other mid-term woes.
Councils predicted to change hands will centre around:-


In terms of the number of wards won, the prediction is:- 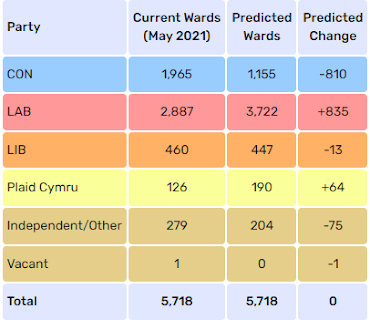 WARD PREDICTION - ENGLAND & WALES
Labour are predicted to gain around 800 seats, with the Tories losing a similar number. That may be disappointing for the Tories, but it is nowhere near catastrophic and does not indicate a meltdown in Tory support nor a ground shift in the electorate. This is the mid-term of the Parliamentary cycle and the voters always take this opportunity to give the sitting government of the day a well-aimed kick up the arse.


A direct comparison of the prediction against the actual wards won when the wards were last contested is complicated by the fact that there have been several significant sets of new ward boundaries since then. The table below shows, with the same prediction, using the old ward definitions.  Note that since the total number of seats is decreasing by over 550, most parties appear to lose seats.:- 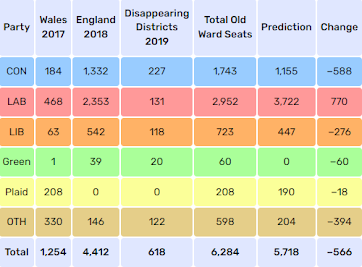 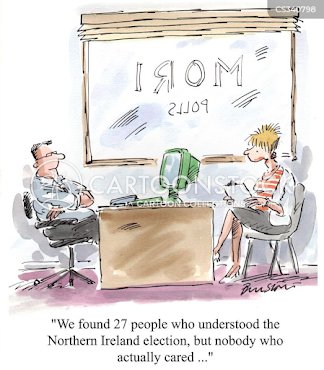 Last minute polling has the tories showing quite a significant recovery and they may now only lose as few as 500 seats - which would be a disaster for Starmer if that were to happen because anything less than 600 means he is not doing as well as Miliband or Corbyn at this stage of the cycle.

An Eye On...
East Riding of Yorkshire, England, United Kingdom