All Blogposts contain only personal views and are published in an entirely personal capacity. However, I do not accept any legal responsibility for the content of any comment unless I have refused to delete the comment following a valid complaint. Any complaint must set out the grounds for the deletion of the comment. I also reserve the right to delete comments that - in my opinion, are offensive or make unsubstatiated accusations against persons or groups. Like the BBC, this Blog is not responsible for the content of external internet sites. (with thanks to Valleys Mam's blog where I nicked most of this from).

(This is something I compile for somewhere else.  I will now publish it on here as well every month.) 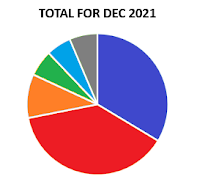 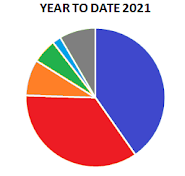 Across December there were 27 polls conducted at various times by all the major polling agencies.  Unusually, for outside of an election time, these included 5 MRP polls (MRP polls are conducted using a very different methodology).   There was also an awful lot of ‘in depth’ stuff.
Polling average was (figure in brackets compared to last month).
Con 33.6% (-3.0%)
Lab 38.3% (+1.8%)
LDem 10.0% (+0.8%)
Grn  6.1% (-0.5)
Rfm 5.7%*
Oth 6.3%*
Lab lead over Con: 4.7% (+4.8%)
(* Because of the rapid growth of Reform, they will now be shown separately to 'Oth' until they drop back to <2% again.  Reform have grown rapidly, and in the last couple of weeks of December were at times averaging at north of 6% ).
Tory support swung between 31-38%, Labour's between 33-41% and the LDems between 8-13%, indicating a highly volatile electorate.  Labour managed to hit the magic 40% six times during the 27 polls and on one occasion showed a 9% lead (Opinium, 8-10 Dec). The Tories led Labour in four of the polls - all early in the month. The remaining 23 were Labour leads of between 2-9%
December hit the Tories hard and contrary to the perception it is the media's 'sleaze' stories doing the damage,  underlying polling amongst actual wavering Tory voters shows that the main reasons for their discontent with Boris are illegal immigration, the triple lock, Covid fatigue (the standard Tory voter wants a total  end to lockdowns, restrictions etc and just 'live with it'), and the perception that we are still too closely tied to the EU.  'Sleaze' is in 5th place as a cause amongst actual Tory waverers.   That said,  for a mid-term the Tory strategists will probably be quietly satisfied with things - at this stage under Miliband Labour were over 20 points ahead and under both Corbyn mid-terms were over 10 points ahead. The Tories won the three subsequent elections.
Interestingly, despite this being a very very good month for Labour overall,  they are still below where they were during the period Oct 20 - Jan 21 and their lead is more down to disaffected Tories moving to Lawrence Fox's Reform Party than the electorate as a whole looking at Labour as 'electable', making Labour’s lead fragile at best and making it look more of a traditional mid-term anti-government reaction as opposed to an election time pro-opposition endorsement.  The biggest 'gripe' among non-tribal Labour voters by a very very long way remains the belief that they don't actually know what Labour stands for, nor what it would do differently if they were in power now.  Nor are they convinced (despite Labour assurances) that Labour will not attempt to move to a position of 'closer alignment' with the EU, nor attempt to re-join the Customs Union or even the Single Market.  Should they suddenly perceive Labour as intending to do any of that, Labour would suffer a major reversal in the polls quite quickly. The EU and attitude to illegal immigration remain Labour's weak points along with economic competence.
As it stands,  if a General Election were conducted on these December figures and using the new boundaries,  it would result in a hung Parliament of L289, C270, SNP55, LD15, PC2 G1, NI18, with neither side being able to form a majority government without the SNP - and the SNP in turn remain adamant that the price of their support is the immediate and total devolution of the Section Order, and at that point, their MPs will adopt a position similar to Sinn Fein's and not take their seats, making a Labour-LDem Coalition achievable.  Anything less and they will not prop up either a red or a blue Westminster government.  Remember, the SNP has absolutely no interest in Westminster - Red or Blue, and sees both Westminster and the two main parties as nothing more than albatrosses round it's neck and an imperialist construct and obstruction to Scotland's independence.
As polling guru and President of the British Polling Council Prof sir John Curtice points out – “The big difference now is that Starmer (still) isn’t seen as a leader-in-waiting. Indeed, that Labour performs so well in the polls (currently) is more due to Conservative collapse than resurgent Labour.”  Likewise Justin Ibbett, Chief Executive of FocalData (leading MRP pollsters) “We are talking about a collapse in the Tory vote not a revival of the Labour party.”
In-depth reveals that less than 2% of voters have switched directly from the Tories to Labour - the majority of Tory 'deserters' have gone further to the right to Reform (the new UKIP/Brexit Party) and will probably mostly return come election time, or have gone to the LDems (particularly in leafy suburbia). Most of Labour's surge seems to be coming from 'Don't Knows' and from LDems.  This would explain why the LDems remain largely static despite hoovering-up Tory waverers - for every Tory they get, in turn they lose one of theirs to Labour.  Anne McEvoy, of The Economist and writing in the Guardian this week sums it up very well in her article where she says; "Tories do not fear Keir and until they have reason to do so, Labour’s paper gains and more positive polling will remain unconsolidated".
Comparison
General Election 12 Dec 2019:
UK TOTAL - Con 43.6%, Lab 32.2%, LDem 11.6%, Grn 2.7%, Oth 9.9%
GB ONLY - Con 44.7%, Lab 33.0%, LDem 11.8%, Grn 2.8%, Oth 7.7%
UK lead Con over Lab: 11.4%
GB lead Con over Lab: 11.7%
Polling figures for 2021 (256 polls)
Con 40.3%, Lab 35.2%, LDem 8.4%, Grn 5.7%, Rfm 5.7, Oth 4.7
(Oth includes SNP, Plaid, UKIP)
ave lead Con over Lab 2021: 5.1%
Polling figures for Dec (27 polls)
Con 33.6%, Lab 38.3%, LDem 10.0%, Grn 6.1%, Rfm 5.7%, Oth 6.3%
ave lead Lab over Con Dec: 4.7%

FRANCE (elections 10 & 24 Apr, 2022)
There are 17 candidates at this stage, however only the 5 I have listed below have any realistic chance of making it to the actual first ballot on 10 Apr, let alone the second round run-off.
After the first round of voting on 10 Apr, all remaining candidates at that stage bar the top two are eliminated.  The top two then progress to a run-off on 24 Apr, with the final winner then becoming President.   This actually makes things far more interesting, especially this time. For example should Melanchon - a near-Communist and outspokenly anti-EU be eliminated in the first round,  would his voters switch to pro-EU Macron in order to block someone from the right? Or go to the right to support someone anti-EU?
All smart money is that second round run-off will now be between incumbent Macron on one side and either Le Pen or Pecresse on the other, and it will be the French voters feelings over the EU and their own illegal immigrant problems that will decide the winner.  Pro-EU, or EU-lite, or No EU.  Whatever,  the final result looks as though it is going to be very very close, with Macron shading it slightly if up against Le Pen,  but losing narrowly if up against Pecresse.  Historically, the eventual winner of the second round wins more because people are voting against the other candidate as opposed to supporting the winner - 'clothes pegging' as it is referred to, where they wear a clothes peg on their nose and vote for the candidate who stinks the least.
During December there were 16 Polls averaging:
( Top 5 - Left-Centre-Right-Nationalist-Gaullist)
Melenchon: 9.8% (anti-EU)
Macron: 24.0% (pro-EU)
Pecresse: 17.1% (EU-sceptic)
Le Pen: 15.9% (anti-EU)
Zemmour: 13.4% (anti-EU)
12 Others: 19.8%
*****************************************

"December hit the Tories hard and contrary to the perception it is the media's 'sleaze' stories doing the damage, underlying polling amongst actual wavering Tory voters shows that the main reasons for their discontent with Boris are illegal immigration, the triple lock, Covid fatigue (the standard Tory voter wants a total end to lockdowns, restrictions etc and just 'live with it'), and the perception that we are still too closely tied to the EU"

Not to mention that the "levelling up" train is going in reverse at high speed.

Among Britons who say they don't know how they would vote in a General Election, for which parties could they see themselves voting?